Two years ago today, I drove to South Wales to meet Dolly. She was an ex-breeding bitch who as fate would have it, was Poppy's daughter.

Dolly came home that day, 22nd July 2007 and from that day and for the one year and 2 months she was here, lived a happy life, being loved and having fun. After 6 horrid years, Dolly finally had a sofa to call her own. 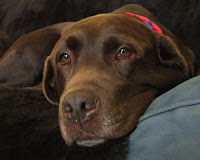 Sadly, Poppy died just a few weeks later, but Dolly had Bumpy and together, they shared some happy times and adventures, including going on the top deck of the ferry to the Isle of Wight. 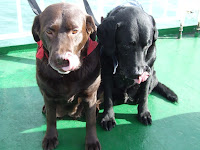 By April 2008, Sir H had arrived and we'd said our final goodbye to Bumpy. Then, as you all kow, Wiggle arrived in June and helped Dolly celebrate her Gotcha Day. 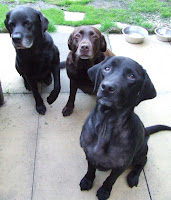 For 3 months, Wiggle and Dolly were best of friends, until that sad day in September last year when Dolly passed away.

Wiggle doesn't know it's a special day today, but I'm sure he remembers his choccie sister and misses her as much as I do....
Posted by Wiggle at 11:20

Oh no, I think I need to lend mummy my Doggy Dry Towel!!

Dolly had such a sweet face... Thank you for making her feel loved & wanted her last year.
Lucy the Lab & her mom, Jana