Ziggy has an exciting day planned next Saturday - we're going to Hever Castle in Kent for the Canines at the Castle event! 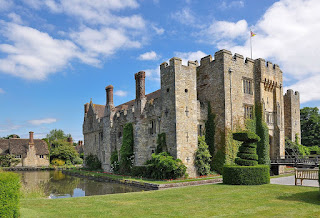 The lovely Kent volunteers for Labrador Rescue South East & Central will be there on Saturday 4th August raising funds for the rescue and promoting the amazing work the charity does.

We are so very grateful for the support that Ziggy has received that we will be going along to help out.  We're also looking forward seeing the volunteers again who played such a big part in his rescue. 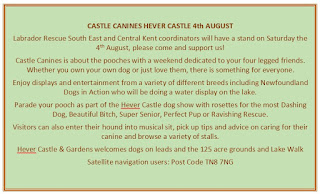 If any of our fabbie followers are going to Castle Canines or in the area, please do come along to say hello to Ziggy!
Posted by Wendy at 18:00 No comments:

Ziggy is a sleepy Baldy Dog.  He's had a lot going on recently, having fun, going to work, trying to grow fur etc 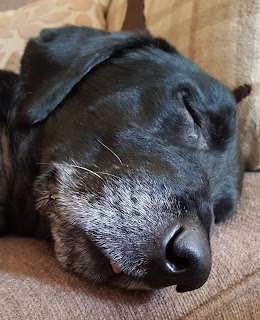 Last weekend he was very busy entertaining Grandma when she came to stay, taking her into town for brunch by the river although she didn't paddle with him and Sofy. 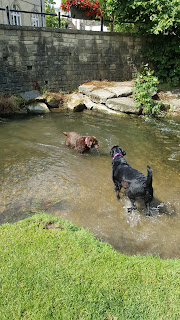 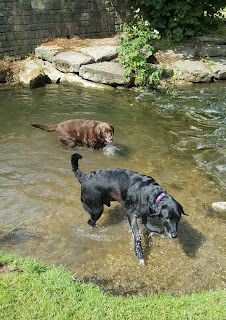 Back on dry land before sharing our brunch and then going back in the water: 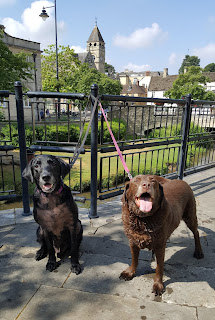 On Friday Ziggy had an appointment with his dermatologist so he came to work and got to hang out with Lilly and he loves Lilly: 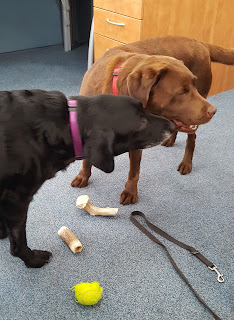 After a lot of running around and playing with all the toys, Ziggy needed to sleep. 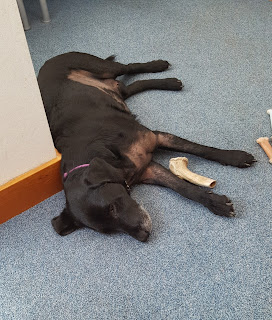 Ziggy got on really well at his vet appointment and Bridget was very pleased with his progress, telling us she thought he was looking his best yet.  The infection in his ears is mostly cleared up now and I can cut down from every other day to once a week cleaning and the same with his baths, weekly from now on.

The medication for his allergies is definitely making a big difference and Ziggy doesn't scratch too much at all now.  Which is just as well as we are so close to the fields, there's no getting away from the pollen.

Although with the hot weather, our countryside is not so green anymore although it's been really lovely going out early before the day gets too hot: 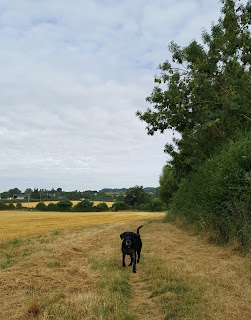 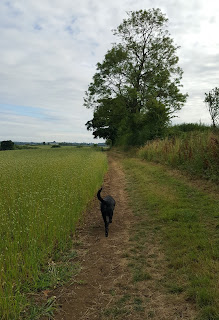 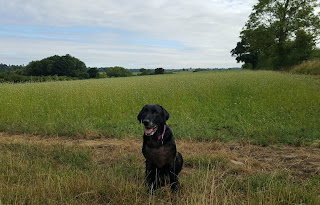 Ziggy has his 7th birthday coming up, on the 1st August and on the 13th we will celebrate his first Gotcha day.  The year has definitely gone past quickly!

Ziggy and Sofy have been trying to keep cool while the weather has been so hot.  They've mostly managed this by keeping calm and sleeping a lot!  Sofy gets herself into the paddling pool while Ziggy will paddle if I drop little cubes of cheddar cheese in for him.

Walks have either been 6am, 9pm or not at all as it has been difficult to walk in the shade.  Some evenings I've taken him for a drive with the aircon on in the car and the windows wide open and he's loved sitting with his head up, turning this way and that to feel the wind in his ears!

Ziggy is still having his bath's every 3 or 4 days and he is starting to look very handsome and is even sporting a distinguished single grey eyelash: 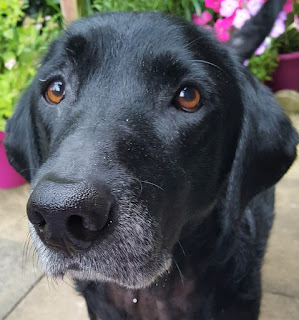 We love our Baldy Dog: 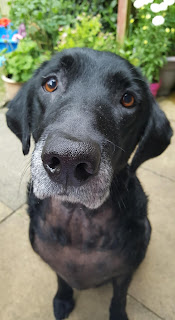 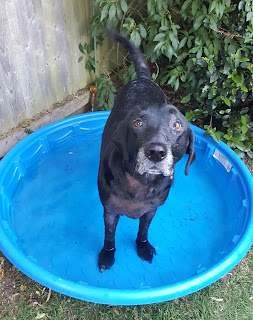 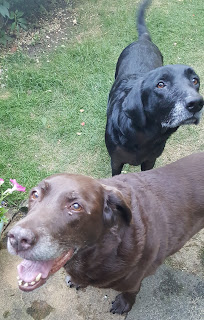 Sofy and Ziggy's tummy clocks wake as soon as it is light so we have been up early while it is still cool.  Being in the field at 6am is perfect for Ziggy as the sun is not too hot and the long grass is damp with dew: 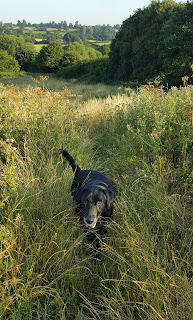 The grass is now taller than Ziggy:

Sometimes I can't decide whether Ziggy is looking cute or goofy! 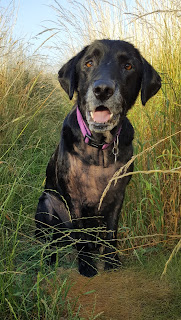 Mr Ziggy has had a busy few weeks with holiday, days out, weekends away, visitors and seeing his dermatology specialist so there is a lot to catch up with!

But most of all, he has been busy being handsome, just like this: 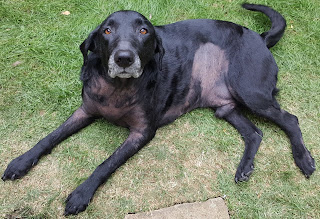 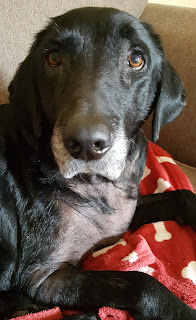 Ziggy is off the steroids and antibiotics and only on the Cyclosporin for his allergies and I'm pretty certain he has some tufts of new fur!  This is very exciting as it has been a long journey to get past the skin infections and getting the right medication and treatment since he first arrived, looking like this: 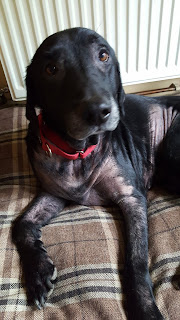 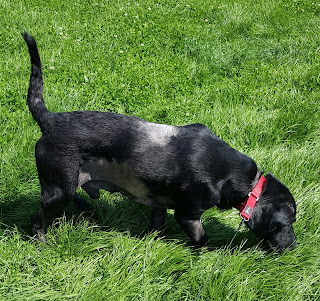 He has had a lot of problems with his ears, a combination of the allergies and bacterial infection but we've recently started new cleaner and gel and after just a week his ears are way better and not causing him to scratch.  Ziggy still has a bath every few days as it has been a combined effort of topical treatment as well as medication but we are getting there.

I've had time off work as our lovely friend Jana has been visiting from Seattle.  We got to know each other through Twitter back in 2009 when Wiggle met Jana's choccie girl Lucy and from then on we have been the best of friends.  While Jana was here, we did a lot of tourist things including taking Ziggy down to Southbourne Beach.  Sofy chose not to come by refusing all bribes and not moving from her bed.

I don't know if Ziggy had been to the seaside before but he had fun, running around and splashing in the sea: 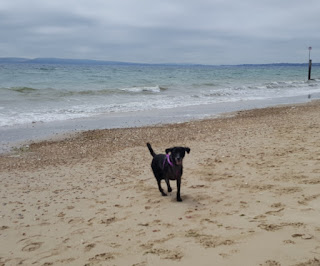 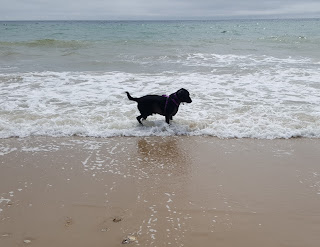 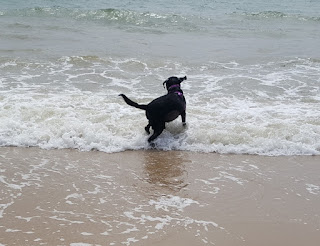 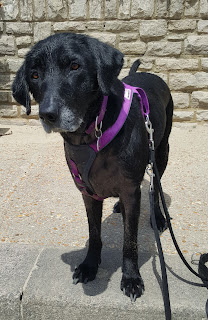 While Jana was here we spent a few days in London so Sofy stayed with my mum and Ziggy went to stay with his would-be girlfriend, Lilly.  He loves Lilly so was very excited when she came to stay with us for the weekend.  While she was here, she had a bath and so did Squirrel which meant that the 3 Labbies got together to plan how they could rescue Squirrel from the washing line..... 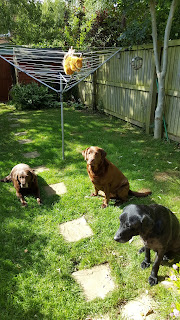 Before Jana left we took Ziggy and Lilly for a date night at the pub.  They both got some leftovers of our dinner as they were both on their best behaviour. 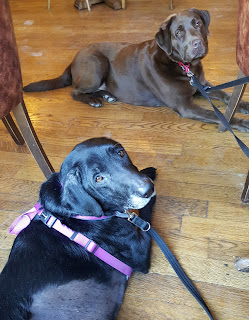 Now that everything is back to normal we are trying to keep cool during this warm weather.  Ziggy does not cope well with the heat and has been a bit under the weather but he's fine now and staying out of the sunshine.  Sofy has been enjoying their new pool but Ziggy isn't sure yet.... 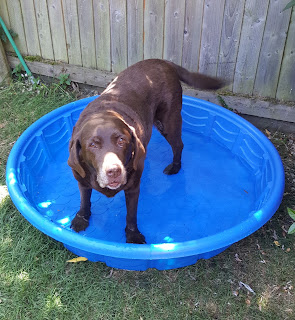