As soon as I got home from work I took the boys up on the Downs for a run around. Well, Wiggle did the running! 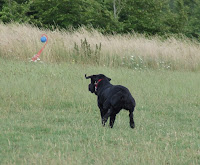 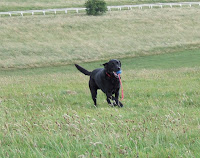 And waiting for me to throw the ball, with a nice bit of grass sticking out of his mouth!

Sir H had a lie down:

While Wiggle was far too busy, chasing after his ball on a rope! 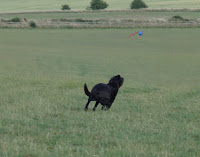 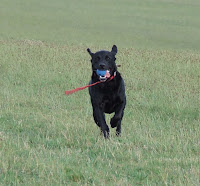 Sir H didn't stay still the whole time - he managed a roll around in the grass: 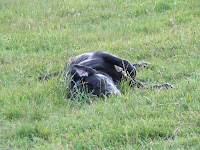 Wiggle, catching his breath for a moment: 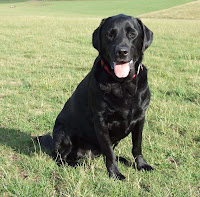 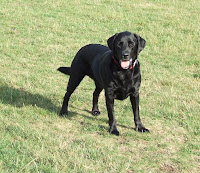 So of course, I did throw the ball:

Both boys, enjoying the sunshine: 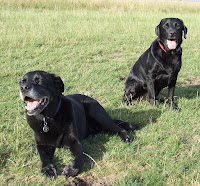 Wiggle likes to cheat and run to where he thinks I'll throw the ball: 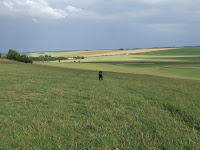 But then has to go the other way when he see's where the ball went! 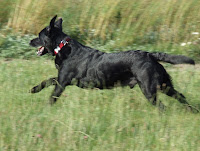 This time I threw the ball before he had a chance to run ahead: 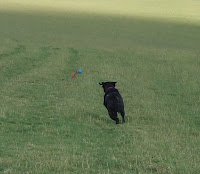 But the next time, Wiggle didn't see exactly where the ball went so spent a while trying to find it: And lets me know what he thinks of having to search! 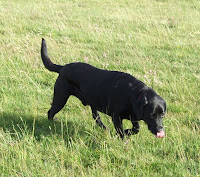 I know when Wiggle is starting to get tired as he drops the ball!

After all that running around, Wiggle is well and truly worn out and fast asleep on the sofa!
Posted by Wiggle at 19:51

That looks like a great place to chase & run around - I do that too Wiggle... as soon as I've brought the ball back I race off again and wait for them to throw it again. BOL if I'm not paying attention when they throw it I just wait for them to get it.. so funny watching them do the fetching!