Wiggle had a rather muddy but good walk yesterday when we met up with Clare, one of his sponsors and her other half and of course their dog, the very lovely Lady.

We met just outside Birmingham and walked around the park. Lady joined Wiggle for a game of fetch while Sir H mostly followed Lady around. I think their love of wallowing in muddy puddles is what made Sir H decide he was in love!

Quick stop for a group photo

And then back to running after the tennis balls. Lady is very clever and can carry two at a time, which confused Wiggle a little. Lady noticed that Wiggle had found a puddle and was quick to realise a wallowing opportunity was nearby... 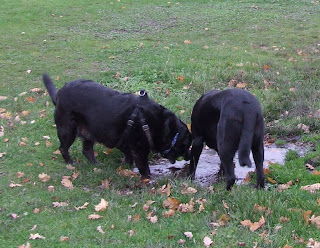 However, while Sir H and Lady were sharing their mutual appreciation of mud, Wiggle had been busy skidding in muddle puddles 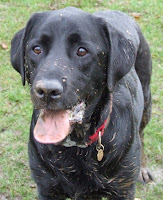 Before it was time to head back to the car, Lady had one last wallow: 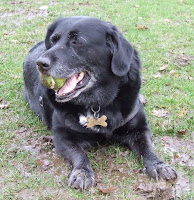 Then, no doubt much to their disgust, Wiggle and Sir H had a rub down with towels to try and dry them off a bit.

It was very lovely to meet Clare and I think both my boys enjoyed their walk with Lovely Lady!

This morning we popped over to Bristol to see our friend Sarah and went for a walk in the park with Bran and Flora and Twister who was visiting too. With Twister as keen on the tennis ball as Wiggle, it wasn't long before the ball was shredded but that didn't stop them running around like loons.

After some refreshment for us humans we headed on home. Driving past Maude Heath I noticed the cows had gone in for milking so we stopped and the boys had another walk. Well, Wiggle did lots of running while Sir H mostly laid down, as you can see in this little video clip:


Wiggle was keen for me to throw the ball some more: 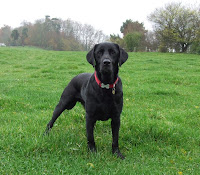 Even though the drizzle had turned to rain! 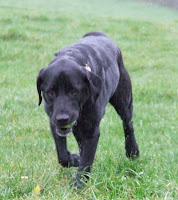 Meanwhile, Sir H showed what he thought about having to be out in the horrid weather 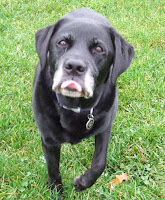 Quick sit before we came home

Both boys are worn out after their busy weekend!
Posted by Wendy at 15:30