It's Glow in the Dark Wiggle!! And Sir H. Both demonstrating their "PupLights". I had two originally, for Poppy and Bumpy but somehow managed to lose one. As its dark in the evenings now, I decided it was time to replaced the lost light and it arrived today.

As you can see, the boys are now well lit up and the good thing about the Puplights is that even if they are offlead and facing away from me, the light shines down towards to the ground so I can still see them.


It's a bit difficult to get a decent photo but you get the idea! 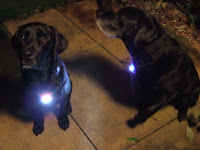 After all the fireworks last night, I'm not taking them out tonight. Thankfully, neither Wiggle or Sir H were worried about the loud noises but there are still a few fireworks going off so they are staying home, rather than getting scared.
Posted by Wendy at 19:33